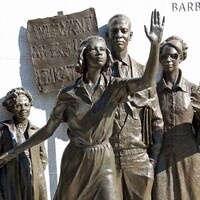 Dell Upton - What Can and Can’t Be Said: Commemorating African-American History in the Shadow of the Confederacy

Since the 1980s, Southern localities have erected increasing numbers of monuments that commemorate the civil rights movement of the 1950s and 1960s and the longer black freedom struggle more generally. However, the forms, locations, and sometimes even the existence of these memorials have been affected and deflected by assumptions about the nature of civic space and public commemoration. As a result, Southern civic spaces often present an odd juxtaposition of monuments celebrating opposite sides of the black freedom struggle. Periodic incidents such as those in Charleston in 2015 and in Charlottesville in 2017 provoke public debate about the appropriate fate of monuments celebrating the Confederacy and the longer white supremacist tradition more generally. This talk will explore some of these constraints and paradoxes of the Southern civic landscape.  This event is open to the public and sponsored by the annual Schroedl lecture.

Tickets are complimentary, but must be reserved in advance at tickets.goucher.edu or by calling 410-337-6333.