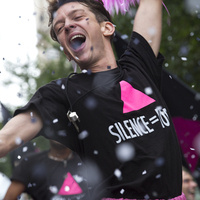 BPM is a fictionalized account of the history of Act Up-Paris, the
triumphant true story of some of the great heroes of our era: the men and women who fought for the recognition and improved treatment of HIV and AIDS patients at a time when a diagnosis was a death sentence. As an original member of Act Up, writer-director Robin Campillo brings a detailed, thoroughly researched authenticity to his reconstruction of the activist organization’s politically and emotionally charged group meetings, its colorful protests, and the intimate relationships that bound the tight-knit group together.