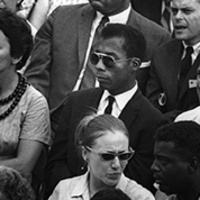 French Transnational Film Festival screening: I Am Not Your Negro (Raoul Peck, 2017)

The French Transnational Film Festival continues with acclaimed recent documentary I Am Not Your Negro:

In 1979, James Baldwin wrote a letter to his literary agent describing his next project, Remember This House. The book was to be a revolutionary, personal account of the lives and successive assassinations of three of his close friends—Medgar Evers, Malcolm X and Martin Luther King, Jr.

At the time of Baldwin’s death in 1987, he left behind only thirty completed pages of his manuscript.

I Am Not Your Negro is a journey into black history that connects the past of the Civil Rights movement to the present of #BlackLivesMatter. It is a film that questions black representation in Hollywood and beyond. And, ultimately, by confronting the deeper connections between the lives and assassination of these three leaders, Baldwin and Peck have produced a work that challenges the very definition of what America stands for.