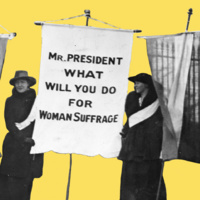 In honor of Goucher College's  students and faculty who were active in the struggle for women's suffrage, the college will unveil a commemorative roadside marker on its campus on February 28, 2020.  This marker, which officially places the college on the National Votes for Women Trail, was awarded to the college by the National Collaborative for Women's History Sites in partnership with the William G. Pomeroy Foundation.

The ceremony program: "Two Perspectives on the Women's Suffrage Movement in Baltimore: Goucher College Faculty and Students, and African American Women" will include presentations by:

This year marks the 100th anniversary of the passage of the 19th Amendment, which guaranteed and protected a woman’s constitutional right to vote in the United States.