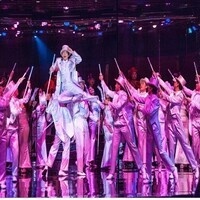 Students in Goucher's Opera and Musical Theatre Workshop, directed by Jennifer Blades and Andrew Stewart, will present Cabaret based on the play by John Van Druten and Stories by Christopher Isherwood.

Cabaret  takes place from 1929-1930, a time when Berlin, amid a post-World War I economic depression, is transitioning from a center of underground, avant-garde cultural exploration to the beginnings of Hitler’s totalitarian regime and the rise of the Nazi Party. Into this world enters Clifford Bradshaw, a struggling American writer looking for inspiration for his next novel. After meeting his first German friend and English student, Ernst Ludwig, on the train, Cliff takes up residence at Fräulein Schneider’s boarding house, an inexpensive and somewhat rundown house on the famed Nollendorfplaz. It is New Year’s Eve, and Cliff wanders into the Kit Kat Klub, a seedy nightclub overseen by the gender-bending Master of Ceremonies, the Emcee. Here, Cliff meets Sally Bowles, a vivacious, talented cabaret performer, and an utterly lost soul. Sally and Cliff begin a relationship, which blossoms unexpectedly into a dream-like romance. As time passes, however, the situation in Berlin changes from exciting and vital to ominous and violent. At some point, each of the characters must decide whether to flee Berlin or face the growing threat.

CABARET is presented by arrangement with Concord Theatricals on behalf of Tams-Witmark LLC. www.concordtheatricals.com.

All attendees must be vaccinated and remain masked throughout the performance.