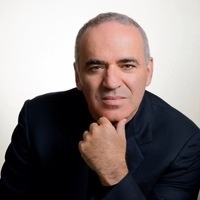 This event is free to the public, and no registration is neccessary. A livestream will also be available.

We ask that all attendees wear N-95, KN95, or KF94 face masks indoors. Masks will be provided for attendees who do not have one.

Born in Baku, Azerbaijan, in the Soviet Union in 1963, Garry Kasparov became the under-18 chess champion of the USSR at the age of 12 and the world under-20 champion at 17. He came to international fame at the age of 22 as the youngest world chess champion in history in 1985. He defended his title five times, including a legendary series of matches against arch-rival Anatoly Karpov. Kasparov broke Bobby Fischer’s rating record in 1990 and his own peak rating record remained unbroken until 2013. His famous matches against the IBM super-computer Deep Blue in 1996-97 were key to bringing artificial intelligence, and chess, into the mainstream.

Kasparov’s was one of the first prominent Soviets to call for democratic and market reforms and was an early supporter of Boris Yeltsin’s push to break up the Soviet Union. In 1990, he and his family escaped ethnic violence in his native Baku as the USSR collapsed. In 2005, Kasparov, in his 20th year as the world’s top-rated player, retired from professional chess to join the vanguard of the Russian pro-democracy movement. In 2012, Kasparov was named chairman of the New York-based Human Rights Foundation, succeeding Vaclav Havel. HRF promotes individual liberty worldwide and organizes the Oslo Freedom Forum. Facing imminent arrest during Putin’s crackdown, Kasparov moved from Moscow to New York City in 2013.

The U.S.-based Kasparov Chess Foundation nonprofit promotes the teaching of chess in education systems around the world. Its program already in use in schools across the United States, KCF also has centers in Brussels, Johannesburg, Singapore, and Mexico City. Garry and his wife, Daria, travel frequently to promote the proven benefits of chess in education and have toured Africa extensively.

Kasparov has been a contributing editor to The Wall Street Journal since 1991 and is a regular commentator on politics and human rights. He speaks frequently to business and political audiences around the world on technology, strategy, politics, and achieving peak mental performance. He is a Senior Visiting Fellow at the Oxford-Martin School with a focus on human-machine collaboration. He’s a member of the executive advisory board of the Foundation for Responsible Robotics and a Security Ambassador for Avast Software, where he discusses cyber security and the digital future. Kasparov’s book How Life Imitates Chess on strategy and decision-making is available in over 20 languages. He is the author of two acclaimed series of chess books, My Great Predecessors and Modern Chess. Kasparov’s 2015 book, Winter Is Coming: Why Vladimir Putin and the Enemies of the Free World Must Be Stopped is a blend of history, memoir, and current events analysis.

Kasparov’s next book was Deep Thinking: Where Machine Intelligence Ends and Human Creativity Begins(May 2017). It details his matches against Deep Blue, his years of research and lectures on human and machine competition and collaboration, and his cooperation with the Future of Humanity Institute at the University of Oxford. He says:

“AI will transform everything we do and we must press forward ambitiously in the one area robots cannot compete with humans: in dreaming big dreams. Our machines will help us achieve them. Instead of worrying about what machines can do, we should worry more about what they still cannot do.”

This event content is powered by Localist Event Calendar Software.