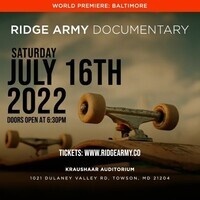 On an abandoned plot of land, one of Baltimore's most well-known DIY skateboarding spots was developed. The Ridge, as it was known, left an indelible mark on the city's skating scene and influenced the lives of many who frequented there. When the destination's future was uncertain, so were the lives of the skateboarders who spent every waking moment in a place they called home. In this film, you'll learn about deep stories, emotional connections, and how a location that had no name before grew to take on a life of its own. What happened there will astound you!

Ridge Army is a grassroots film made possible by community members and movement supporters.